Plaintiffs seeking to pre-empt Gov. Rick Scott's likely appointment of three justices on his final day in office remain mum after the Florida Supreme Court refused to hear the case.

Pamela Goodman, representative for the League of Women Voters who filed the writ, told the Florida Record the group was in "legal strategy mode," after apologizing for not wanting to make a detailed statement.

In mid-December, the court kicked the can on the conundrum, deciding by a 6-1 margin that it was not the right time to consider a case taken by the league against Scott. The justices differed on when the right time might be. 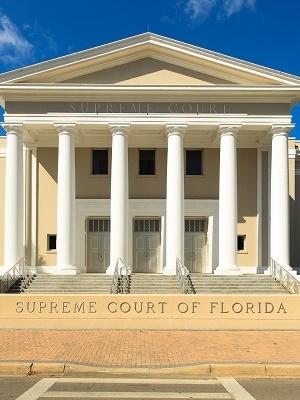 This coming year, the issues debated in the league's case against the governor might again be raised in the state's highest court, and they will certainly play a core role in the gubernatorial election.

This particular constitutional issue has long been predicted. It could get very messy.

At issue is whether Scott has the right to appoint three new justices to replace those retiring on the same day he must leave office. He has stated his intention to do so: “I will appoint three more justices the morning I finish my term,” he said in June.

One Florida Supreme Court justice was pretty clear. Any move by Scott to appoint three new justices would be "blatantly unconstitutional." All the rest is muddy.

Critics say Florida law states a governor cannot appoint a new justice until a sitting one steps down, retires or dies.

The League of Women Voters filed a petition asking the state Supreme Court to issue a writ telling Scott he has no power to appoint the justices.

“The Florida Constitution prohibits a governor from making a prospective appointment of an appellate judge to an existing seat before that seat becomes vacant,” the writ argued.

At issue is timing. Three justices regarded as being more liberal-leaning are all stepping down because they will have reached age 70, the mandatory retirement age. On the same day, Scott's second term will end.

In reaction to Scott's announcement he intends to name the three new justices, the league and Common Cause, a political watchdog organization, petitioned the Supreme Court for a writ prohibiting the governor from filling appellate court vacancies occurring due to terms expiring in January 2019.

Four of the justices indicated in their December opinion that Scott has to make the actual appointments before the issue can be considered by the court, though there was some ambiguity in their wording.

Justices Peggy Quince and Barbara Pariente, both of whom are retiring, concurred that it was not the right time to consider the matter but added clearly it was their opinion that Scott does not have to make the actual appointments before the court can step in.

In her written opinion, with which Pariente agreed, Quince said the other four justices indicated that the time would not be ripe until the governor makes an appointment.

"However, the majority then appears to suggest that only 'some action' would be necessary for this Court to consider the Governor’s authority to make said action," Quince wrote.

"This inconsistent language creates unnecessary confusion about when a future petition ... would be ripe for this Court’s consideration."

Justice Fred Lewis, who is also retiring, vigorously dissented, arguing the suit taken by the plaintiffs was filed to protect the state from "blatantly unconstitutional actions," WFSU reported. He wrote the majority summarily dismissed the petition "for reasons other than a proper analysis of the law."

If Scott does make the appointments, and the Supreme Court upholds that decision, he will turn the court solidly conservative for years to come.

Many liberals, not surprisingly, do not want Scott in charge of the appointments. Solid conservatives are arguing he has every right to appoint them. Both sides will make this a big political issue in a big election year.

Floridians could vote in someone as equally conservative as Scott, but the race is still a toss-up, according to various analysts, including the University of Virginia's Center for Politics.

In an analysis of the Supreme Court's December decision, Jordan Pratt, deputy solicitor general in the attorney general's office, said many are "predicting that the selection of their successors will profoundly impact the Florida Supreme Court’s ideological composition."

In a piece, a personal one and not reflecting the views of his office, posted on the website of the conservative Federalist Society website, Pratt said it will "feature as a political issue in the 2018 gubernatorial election."

He added,"For now, the court has declined to entangle itself in that debate."