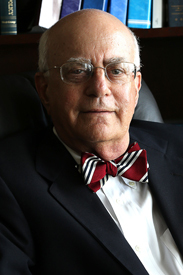 MIAMI — Murray Austin Greenberg, a longtime attorney and law professor in the Miami area, died Dec. 31, 2016, at age 73 after losing a long battle with lymphoma, according to a report by the Miami Herald.

According to a November 2015 news release on the University of Pennsylvania's website, some of the well-known cases Greenberg was involved with included representing Miami-Dade County in the 2000 U.S. presidential-election cases and in the county commission's districting, as well as drafting and defending county charter provisions.

Greenberg also served as a chair for the Good Government Initiative, according to the Penn website news release. His other out-of-practice activities included being a member of a Miami-Dade County Charter Review Task Force and a Florida Bar Grievance Committee as well as the Mayor’s Election Advisory Group. He also was on the board of directors of the Friends of the Miami-Dade Public Library.

Greenberg also had taught law as an adjunct professor since 1974, teaching courses at colleges such as The University of Miami, Florida International University and the St. Thomas University School of Law. Before his passing, Greenberg taught state and government law as well as election law at St. Thomas, according to the school's website. After receiving his bachelor's degree from University of Pennsylvania in 1965, Greenberg received his Juris Doctor in 1968.

Greenberg's son, Gerald Greenberg, 42, told the Miami Herald that both he and his brother, Ben, would “aspire to be half the lawyer he was.”

“If you live your life like he did, you're going to be happy,” Gerald Greenberg said.

David Lawrence, who is chair of The Children's Movement of Florida and former publisher of the Miami Herald, commended Greenberg's decency and wisdom in the Herald report.

U.S. Attorney for the Southern District of Florida Wilfredo Ferrer, who was hired by Murray Greenberg to work under him, described Greenberg as a mentor, confidante and friend, saying that he was the type of person whom people listened to when he spoke.

According to his obituary on Legacy.com, Greenberg's family includes his two sons, Gerald and Benjamin, daughter's in law, Anna and Maya and his six grandchildren. His surviving family also includes his brother, Dr. Joel Greenberg, as well as a host of nieces, nephews and in-laws.

Want to get notified whenever we write about University of Pennsylvania ?

Sign-up Next time we write about University of Pennsylvania, we'll email you a link to the story. You may edit your settings or unsubscribe at any time.