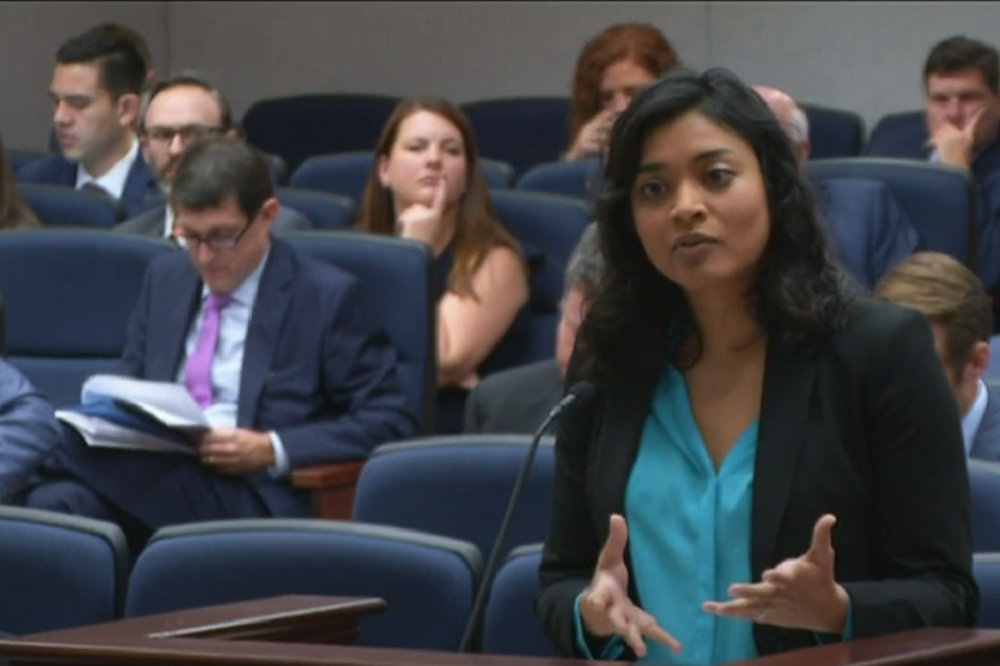 Professor Elissa Gentry discusses the effects of drug injury ads at a legislative hearing in Tallahassee.

In the wake of a workshop it held last month, a Florida House subcommittee has filed a bill to regulate “bad drug ads” aimed largely at recruiting plaintiffs for class action lawsuits.

The Civil Justice Subcommittee filed the legislation, CJS 20-02, after drawing attention to so-called “medical alert” legal advertising around the state that critics see as deceptive and potentially life-threatening.

Representatives of a number of groups, including the Florida Chamber of Commerce, Florida Justice Reform Institute and the Alliance for Patient Access, have expressed concerns about how out-of-state aggregators seeking plaintiffs for legal actions against specific medications have flooded the airwaves with ads designed to scare patients about prescribed drug treatments.

Carolyn Johnson, the Florida Chamber’s director of business economic development and innovation policy, told lawmakers at the January workshop that statistics from the American Tort Reform Association bear out the Chamber’s concerns about these legal ads.

"Florida, particularly two regions in Florida, were some of the most advertised in the country,” Johnson said. “Those regions were the Tampa market as well as the Miami-Fort Lauderdale market."

The newly drafted bill deems a legal ad deceptive and unfair if it fails to be preceded by the phrase “This is a paid advertisement for legal services” or displays a logo resembling that of a federal or state agency. A violation would also occur if the term “recall” is used when the product was not recalled by a public agency or through an agreement between the agency and manufacturer.

Those favoring increased regulation of such advertising point to a survey of patients and medical providers conducted by a national group, Partnership to Protect Patient Health, that found “bad drug” ads do influence consumer decision-making.

About 25 percent of patients who saw such ads ended their drug treatments without speaking with their doctors, the survey said. And 58 percent of the doctors polled said they had a patient who stopped taking medicine after viewing one of the legal services ads.

Last summer, the American Medical Association passed a resolution encouraging states to adopt legislation cracking down on such ads.

Supporters say better regulation, with oversight by state attorneys general, can protect the public without violating First Amendment rights of the advertisers. Keeping simulations of government agency logos out of the ads and ensuring the ads are clearly described as legal services solicitations rather than public service announcements would help to protect public safety, they said.

Supporters of the legislation provided the Record with copies of letters submitted to the subcommittee from Florida physicians. One of them, Dr. Frank Lavernia, director of the North Broward Diabetes Center, said that if one of his patients decides to end a treatment he prescribed, the result can be heart disease, stroke, kidney damage or nerve damage.

“Unlike these one-sided messages meant to scare patients, doctors and patients must consider all risks and benefits associated with a medication,” Lavernia wrote. “For a faceless voice-over on a commercial advertisement to undo months, or even years, of work between a doctor and their patient is wrong and dangerous.”

Seth Baum, a practicing cardiologist in Boca Raton, noted that the lawsuit ads focused only on potential side effects of drugs to scare patients. But they don’t mention the health risks that occur when patients stop taking prescribed drugs, Baum said.

“Prohibiting the use of government logos and, importantly, requiring a disclaimer urging patients not to discontinue medication without consulting their physicians would protect patient safety without hindering the ability to advertise,” he wrote in a letter to the subcommittee.

Elissa Philip Gentry, an assistant professor at the Florida State University College of Law, told the Florida Record that her review of the scientific literature on the effects of such legal ads indicated the results are not always clear.

“My review of the evidence indicates that experimental participants report an increase in risk perceptions in response to attorney drug injury advertisements generally,” Gentry told the Record.

But whether that translates into patient actions, such as discontinuing a medication, is less certain, according to academic research, she said.

“The context for these results is not always clear, however, as experiments do not indicate what the true risk is and whether participants underestimate or overestimate it,” Gentry said.

The professor, who gave a presentation during the legislative workshop last month, said more studies are needed into the effects of such advertising on patient risk perceptions.

“While there is much more work that needs to be done to understand how consumers actually respond to such legal advertisements, the costs in terms of confusion seem at their highest when advertisements do not clearly identify the sponsor,” Gentry said.